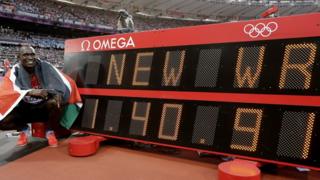 The runner lead from the front to record the fastest ever time for two laps of the track - 1:40.91.

It was the first time the 23-year-old had ever reached an Olympic final and was first athlete to set a new world record on the track at the London Games.