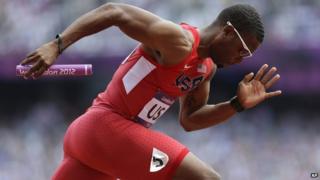 US sprinter Manteo Mitchell has revealed he ran final 200m of the Olympic men's 4x400m relay heats with a broken left leg.

The runner said he felt something break half way his lap but carried on because he didn't want to let his team-mates down.

The 25-year-old began the race for the United States, who went through to Friday's final as the second fastest team despite the injury.

Mitchell still managed to finish the opening lap in 46.1 seconds.

The US men's team are the defending champions and have won every 4x400m Olympic title that they have contested.