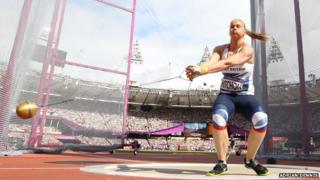 Great Britain's Sophie Hitchon is through to the final of the women's hammer - setting a new British record along the way!

But with 71.98m the young star actually beat her own record - she was already the top British thrower before the Olympics.

The final takes place on Friday - and Sophie will have to throw even further if she wants a place on the medal podium.

That's because the winner of the qualifying round threw almost four metres longer than Sophie.