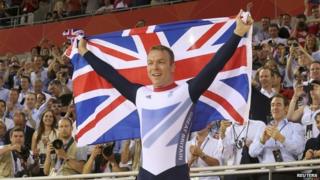 Sir Chris Hoy has won his sixth Olympic gold medal making him the most successful British Olympian ever.

The track star powered through the men's keirin final to take gold in a dramatic final race at the Velodrome.

Hoy's now got more gold medals than any other Brit, he's overtaken rowing legend Sir Steve Redgrave to go into the history books.

Including his silver from 2000 he's got seven medals in total- the same as fellow cycling champ Bradley Wiggins.

This is Hoy's forth Olympic games for team GB, during his career he's proven himself to be one of the greatest ever track sprinters. 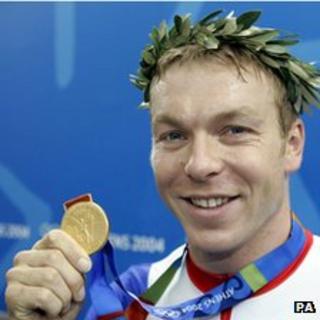 Hoy said: "I wanted to win gold in front of my home crowd. I can't put into words what it means to me. It's one of the greatest feelings I have ever had."

He added that his achievements at the London games will be difficult to top and he's 99.9% sure he wont be going to another Olympics.

But it wasn't just Hoy getting the crowd on their feet- Laura Trott and Victoria Pendleton also took home medals for Team GB on the final night of the track events.

Laura Trott kicked off the evening with a gold in the women's omnium event. She went into the last of six events in second place but stormed her way to gold in the final round of the time trials.

This is her first Olympic games and she finishes up with two gold medals.

But it was disappointment for Victoria Pendleton who settled for silver. She lost out in the final to her old rival Aussie Anna Meares.

It was a dramatic race for Victoria- she thought she'd narrowly won her first round but was later relegated for breaking the rules.

Victoria says she's hanging up her bike for good now. She leaves with an impressive collection of Olympic medals- two golds and one silver.

Overall the British track cycling team have claimed nine medals in London- seven of them gold!