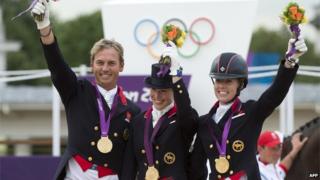 The GB Equestrian team have made history bringing home Britain's first ever gold medal in a team dressage event.

This is the second gold for the GB horse-riders in two days.

Charlotte Dujardin and her horse Valegro were the stars of the show. They set a new Olympic record earlier in the competition and their top score sealed the deal in the final.

The team clinched gold before the other teams even finished their rides which meant everyone had to keep quiet and hold off the celebrations for another fifteen minutes.

Dressage is known as ballet for horses, it takes years to be able to train a horse to memorise their routines.