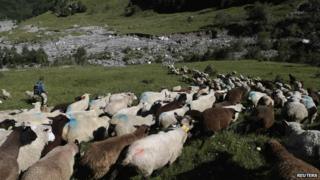 Sheep in Switzerland could soon be fitted with a collar that texts a farmer to warn them of wolf attacks.

A scientist in the country has developed the special collar that monitors a sheep's heart rate and texts the farmer when the heart rate increases for a long time.

It's been invented to try and stop the number of sheep being attacked by wolves. Sheep in smaller farms that can't afford a sheepdog are more at risk because there's no one to scare the wolves away.

They carried out the testing by using two muzzled wolfdogs to scare the sheep. They found that a normal heart rate of a sheep is around 60-80 beats per minute but when they get scared it triples.

The collars have monitors in them that are similar to those used by runners to check their heart rate and could be made later this year.