GB brothers get gold and bronze in the triathlon 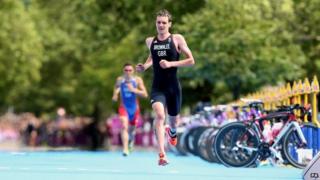 The Brownlee brothers have stormed to gold and bronze for Team GB in the Olympic triathlon.

The triathlon involved an epic 34-mile swim, bike and run around Hyde Park - Alistair notched it up in 1:46:25, 11 seconds in front of Spain's Javier Gomez.

Alistair's brother Jonny made an error by mounting his bike too early and was hit with a 15-second penalty.

But that didn't stop him finishing third and snatching the bronze.