British star Phillips Idowu out of the triple jump 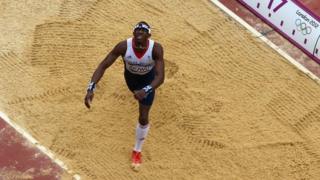 British triple-jump star Phillips Idowu is out of the competition in London 2012.

The 2008 Olympic silver medallist could only jump 16.53m leaving him outside the qualification places, and now won't compete in the final.

There had been big questions about Idowu's fitness in the run-up to the Games.

He only arrived in the Olympic village on Monday after missing Team GB's training camp in Portugal.