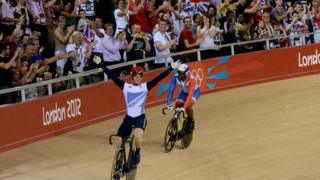 Jason Kenny has won gold for Great Britain in the men's sprint cycling.

He beat world champion Gregory Bauge of France to take the Olympic title.

It's the second gold that Kenny has won at the London Games having already taken home the medal in the men's team sprint.

The win takes Great Britain's medal tally in the Velodrome to five golds and a bronze.