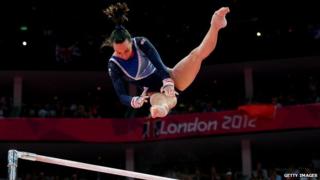 Beth Tweddle has become the first ever female gymnast to win an Olympic medal for Great Britain after grabbing bronze on the uneven bars at the London 2012 Olympic Games.

The 27-year-old performed well but a stumble on the dismount could have cost her a higher finish. She scored 15.916 in the final.

Tweddle has four world titles and is the most successful British gymnast in history.

It's thought that this could be the final time that she performs in the Olympics.