Conor Maynard gets number one album 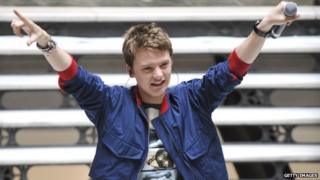 Conor Maynard has stormed straight to number one in the charts with his first album.

Contrast was the most downloaded and bought album of the week.

Conor has also scored a second week in the top 10 singles chart with Vegas Girl at number nine.

Top spot in the singles chart belongs to grime star Wiley with his track Heatwave.

Singers and bands who performed at the Olympics opening ceremony have been doing really well.

Loads of people downloaded tracks by acts including Emeli Sande and Arctic Monkeys after seeing them play in the Olympic stadium.