Chat: Have the Olympics inspired you to take up sports? 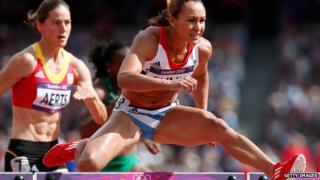 Team GB has had a fantastic Olympics and it's hoped their success will inspire lots of people to take up sports.

Here are some of your thoughts.

"Anthony Ogogo has inspired me to take up boxing. I was never really a boxing fan before but now I can't stop shadow boxing in my bedroom. I have definitely been inspired. Go, Team GB."

"I already do athletics and I am in a club. I was inspired by Jessica Ennis to just go for it even though it may be the first time you have done it. Hopefully I will be picked for Team GB for the 2020 Olympic Games."

"I think that the Muslim judoka Wojdan Shaherkani inspired me to not be afraid and to be confident in yourself as I also wear a headscarf."

"Team GB girls' football has inspired me to play for England when I am older."

"Kat Driscoll is really inspiring to me as she is Britain's only competitor in the trampolining. Even though she has not competed yet she has inspired me to train harder at my club and try and pass my grade 10."

"I love swimming; I am really desperate to compete in the Olympics. My mum says that if I get good enough she will take me every day. Rebecca Adlington rocks, she has really inspired me. Go Team GB."

"Ever since I was little I used to hate sports. However, Victoria Pendleton and Bradley Wiggins have inspired me to take up cycling. Now I can't stop peddling!!!"

Even though I'm not American, Michael Phelps has definitely inspired me to train harder in swimming. I am now going to work harder than ever! I competed for the whole of Wales and came 4th in the 200m!

"I have been inspired by Jessica Ennis. As soon as I found out about her I applied for a club and now I am starting in September. Go Team GB."

"Becky Adlington has inspired me to swim strong and fast."

"I have been inspired by Andy Murray because I love tennis."

"Bradley Wiggins inspired us to do a lot of cycling. Now we ride really far to try to improve.."

"The Olympics have inspired me to do boxing as I love martial arts."

"I would like to beat Usain Bolt's world record. He inspires me to become an Olympic champion one day."

"I'm now interested in water polo after seeing it and I hope I can take it up one day!"

"The Olympics has not only inspired me to be a cyclist but has also made me proud to be British."

"The Olympics has been very inspirational to me. At the start of the summer I could not play tennis or cricket but now I can. Go GB."

"Bradley Wiggins has inspired me to go on more bike rides. He's a legend!!!"

"The Olympics have inspired me to continue working hard at my horse riding no matter what anyone else says. Zara Philips has inspired me with her brilliant performance. I hope I can join team GB one day!"

"I was there at the Olympic games on Super Saturday seeing three gold medals being awarded in one night. I do running and now I want to be in Team GB. Let's get those gold medals!"

"I would like to be an athlete because all sports are good and make you very healthy."

"Rebecca Adlington has inspired me to keep on going even if I don't succeed in meeting my target. I recently competed in South East Regionals and came 12th which I am very proud of. I hope one day I'll make it to team GB!"

"Andy Murray has inspired me to carry on with my sport which is also tennis. Watching him trying and practising and then beating the world's top players in the Olympics shows anything can happen if you focus."

"I think sport is amazing. It inspires people to try something new because they look up to athletes and think, 'if they can do it, I can do it too!'"

"They have definitely inspired me to do more sport and they have also brought the world together."

"I think Usain Bolt has inspired me to take up running but so has Beth Tweddle in gymnastics!"

"The Olympics have really inspired me. I have now started going to a local rowing club and I have been to a cycling course as well. I really want to do well in sport and hopefully one day I will get to be part of team GB!"

"I have been doing sailing for a while now. I saw Ben Ainslie yesterday and his great performance inspired me to keep on going with sailing. I am now saving up to buy a boat and hopefully I will one day be as good as him!"

"I want there to be a water polo pool in West Hampshire after seeing it in the Olympics."

"Jessica Ennis has definitely inspired me to get involved in running. I didn't really know what to do before, but now I've watched the Olympics I want to get involved!"

"I'd never been a sporty person in the past but the Olympics have inspired me to take up sports you don't do at school such as rowing, sailing and trampolining! I love it!"

"I had been watching badminton and right after I'd finished, I picked up a racket and dragged my mum to the back garden to play against me."