The vehicle called Curiosity is the size of a small car. It reached the planet at 6:30am Monday morning, after a journey of nine months.

Curiosity announced its arrival by tweeting: "I'm safely on the surface of Mars. GALE CRATER I AM IN YOU!!!"

The rover now starts a mission of at least two years looking for signs that there may have once been life on Mars.

Even though Curiosity is the fourth rover Nasa has put on Mars, it's a huge deal - it's a lot bigger and more high-tech than the others and scientists are excited about what it will find. 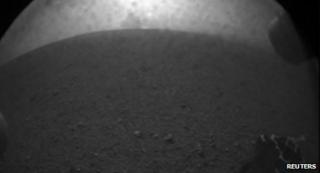 Reuters
This is one of the first images of Mars taken by Curiosity after it landed.

There were huge cheers of relief at the Nasa control room when the vehicle finally touched down on the planet.

"We're on Mars again, and it's absolutely incredible," said Nasa's Charles Bolden. "It doesn't get any better than this."