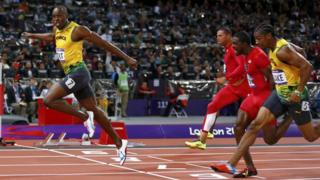 What did Bolt have for breakfast?

On the morning of the Olympic 100m final Usain Bolt had...

He was so fast if you blinked you may have missed him cross the line!

His training partner Yohan Blake won silver with a time of 9.75 seconds, while American Justin Gatlin claimed bronze in 9.79.

Bolt won the title four years ago in Beijing but it wasn't as easy this time around.

But none of that mattered when the starting pistol went off and Bolt stormed to victory in the second fastest time ever (the fastest being his own world record)!

So- gold again in the 100m but he can't celebrate to much quite yet. He's already thinking about his next races - the 200m, and the 4x100m relay. Expect more golds for the Lightning Bolt!