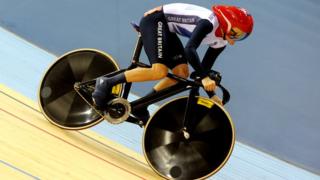 Unstoppable Victoria Pendleton has qualified for the women's individual sprint by setting a new Olympic record.

Pendleton did her lap in 10.724 seconds beating her main rival, Anna Meares, who qualified second in 10.805 seconds.

But Victoria was just short of the world record of 10.643 seconds set in June by Germany's Miriam Welte.

Victoria is already a gold medallist in the keirin and she'll hope to add another to the collection as she races in the last 16 from 4pm.

Meanwhile, Ed Clancy has moved into silver medal position in the men's omnium. He has 19 points, just two behind Australia's Glenn O'Shea.