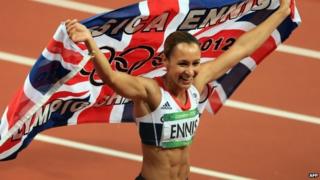 There were an incredible six gold medals for Britain at the Olympics, making it the most successful day ever for the country's sport.

First there were two at the rowing for the men's four and the women's double scull.

Then the women won the team pursuit at the velodrome, breaking the world record for a sixth time in a row.

Trott said: "It has been my dream since I was eight - and we have just gone and done it."

Jessica Ennis delivered the performance of her career to win the Heptathlon and break the British record.

While Greg Rutherford pulled off a huge jump of 8.31 metres becoming the first British man since 1964 to take the long jump gold.

And Mo Farah finished off an unforgettable evening, winning the ten thousand metres in spectacular style.

Amongst his competitors was double world record holder Kenenisa Bekele.

But Farah smashed it and crossed the line first in 26min 46.57sec.

He said afterwards: "I can't believe it. I've never experienced something like this.

It doesn't come round often to have this on your door step and the amount of people supporting me, shouting out your name.

It's never going to get better. This is the best moment of my life."

An amazing win for Ennis

In one of the memorable moments of the London Games, Jess, who people had called the face of the Games, fulfilled her destiny with a series of brilliant personal bests that left her rivals helpless.

She knew she was almost certain of the title going into Saturday evening's final event, and she delivered with two minutes 8.65secs in the 800m.

The 26-year-old's total of 6,955 points was a huge 306 points ahead of Germany's Lilli Schwarzkopf in silver and 327 clear of world champion Tatyana Chernova in bronze.

"I honestly can't believe it after all the hard work and after the disappointment in Beijing 2008," said Ennis.

"I am just so happy. I want to thank everyone who has supported me, they have been amazing. I am so thankful that everyone has helped me all this way. I just had to give it everything at the end. I just wanted to make sure I gave them something and brought it all home.

"I told myself at the start that I'm only going to have one moment to do this in front of a crowd in London and I just wanted to give them a good show."