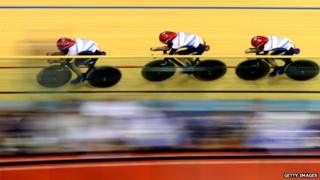 Britain have 11 gold medals after winning the women's team pursuit at the velodrome.

Team GB are now only below China and the USA on the medals table.

Trott said afterwards: "It has been my dream since I was eight - and we have just gone and done it."