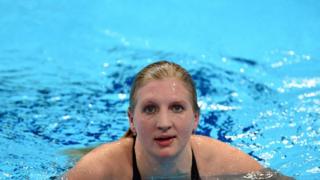 Rebecca Adlington has won bronze in the the 800m freestyle at the London 2012 Olympic Games.

American Katie Ledecky won the event. The 15-year-old only just missed out on setting a new world record.

Ledecky stormed out in front in the first length and stayed there for the whole race. Mireia Belmonte of Spain finished second.

It's the second time Rebecca Adlington has won bronze in the pool at the London 2012 Games.