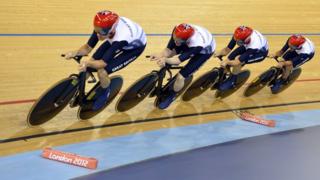 Great Britain have won gold in the men's cycling team pursuit at the Olympic Games.

They even broke the world record during their win at the Velodrome in London.

Team GB were the defending Olympic champions going into the race and won the won in the time of three minutes, 51.659 seconds.