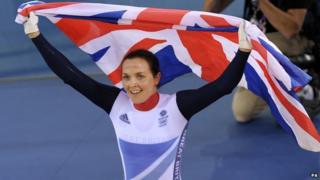 Victoria Pendleton has won gold in the women's keirin event at the London 2012 Olympic Games.

The cyclist narrowly beat off Shuang Guo of China to win the final. It's her second career gold medal after she won the cycling sprint at the Beijing Olympics in 2008.

Pendleton will retire after the Games as the most successful British female track cyclist of all time.

It good news for Pendleton after she missed out on a medal in the team sprint. Along with Jess Varnish, she was disqualified from the event after an illegal overtake.