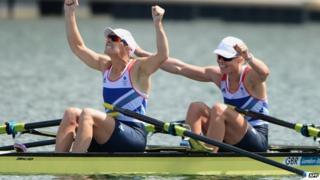 It's the first gold medal for the pair who won the race at Eton Dorney in 6 minutes and 55 seconds.

Winning a gold medal is especially sweet for Katherine Grainger after she has missed out on gold in the last three Olympics.

They were hotly tipped to win after setting a new Olympic record in a heat earlier this week.

It's the fourth gold medal for Team GB in the last 24 hours.

Earlier on Friday morning, Britain won bronze in the men's pair and came fifth in the men's quadruple sculls.