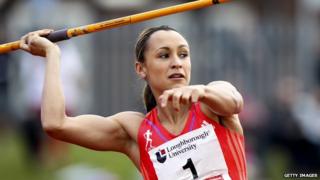 The team won one gold, two silver and one bronze four years ago in Beijing, but Van Commenee wants to double that this time around.

He said: "We are ready to strike, if we are successful, it would be a huge boost for British athletics."

Jessica Ennis is one of Britain's best medal hopes and she starts her quest for gold in the heptathlon later today.

Ennis is one quarter of the Team GB's 'Fab Four' - the others being Dai Greene, Mo Farah and Phillips Idowu.

Team captain Greene, crowned world champion a year ago, begins his own campaign in the 400m hurdles heats on Friday evening. 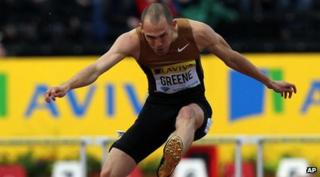 AP
Dai Greene gave an "inspiring" speech to the squad at their training camp in Portugal.

Mo Farah will be aiming to add Olympic gold to the World 5,000m gold and 10,000m silver he won last summer, with the final of the longer distance on Saturday evening and the shorter one a week later.

Meanwhile triple jumper Phillips Idowu has not been seen in competition since the start of June and Van Commenee revealed earlier this week that he has no idea if he will even turn up to the Olympic Village.