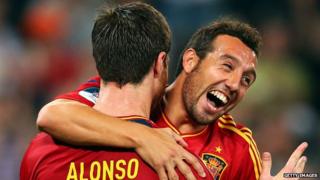 Arsenal are hoping to seal the transfer of not one, but two players before the start of the new season.

It is thought Cazorla will sign for around £16 million, while Sahin will join on a season-long basis from Real Madrid if the player and clubs reach an agreement.

Arsenal hope both deals can be sealed before the new campaign gets under way.

Cazorla, who joined Malaga from Villarreal last summer, is just 5ft 6ins tall and featured for Spain at the 2008 and 2012 European Championships.

The Gunners have already snapped up Germany forward Lukas Podolski from Cologne and France striker Olivier Giroud from Montpellier.

Manchester City, Manchester United and Juventus have all reportedly put in bids for the Dutch striker, whose contract is set to expire next summer.