Gold for Team GB in the double trap shooting 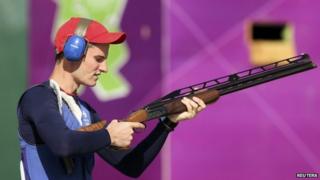 Team GB have struck gold in the shooting with Peter Wilson claiming victory in the double trap.

There were high hopes for Wilson in the final as he's world record holder and world number two.

But he still needed to pull off some amazing shooting to hit 188 out of the 200 flying targets, finishing two shots clear of his nearest rival.

Wilson said "It was an emotional rollercoaster" to win Britain's first Olympic shooting medal for 12 years.