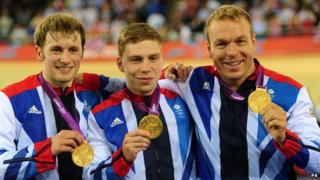 He was part of the 3 man team that won the team sprint competition - and set a new world record.

But it wasn't the only record broken - GB's women's sprint team, and the men's pursuit team both set record times in the velodrome.

It ended badly for the women's sprint team though - they were relegated from the final for breaking the rules.

But the first day of track cycling will be remembered for Sir Hoy's record gold, and means he will be known as one of the best athletes Great Britain has ever produced.

The team that won the gold with Sir Chris were Jason Kenny and Philip Hindes, beating France in the final.

Victoria Pendleton and Jessica Varnish represented Team GB in the women's team sprint event - and stormed to the final.

But judges decided that they overtook each other in the semi final - and relegated them out of the chance to win a medal.

In the end China won the final - but they were also relegated for the same thing - meaning Germany took home gold!

The drama carried on in the other event in the velodrome on the first day of track cycling at London 2012.

Great Britain smashed the world record in the team pursuit. They'll take part in the next round on Friday.

We ran live updates of all the cycling action on the Newsround website - read below to watch how all the drama happened!

We're bringing you updates as all the action happens in the track cycling....the latest updates will appear below.

6.58pm - But let's not forget the other cyclists that make up the 3 man team - Sir Chris Hoy couldn't have done it without Jason Kenny and Philip Hindes.

6.57pm - That's 5 gold medals for Sir Chris - the same as famous rower Sir Steve Redgrave - no Britain has got more.

6.56pm - NEW WORLD RECORD! He's done it! They've done it! It's gold for Team GB and Sir Chris Hoy! And a world record! The velodrome is going crazy!

6.55pm - If Great Britain do win it will be Sir Chris Hoy's 5th gold medal...which is incredible! They're on the track now!

6.50pm - Time for the final of men's sprint - and Team GB have a real chance of taking home gold.

6.25pm - The people who makes the decisions in Olympic cycling competition are called commissaries, and they decided that the Chinese team overtook each other during the race. Looking at the replays, it's looks a tough decision.

6.30pm - Hang on a minute...China have been relegated! For the same reason that Great Britain were...so Germany take the silver medal.

6.21pm - Time for the women's final - it's China v Germany...this is the race that Victoria Pendleton and Jess Varnish would have been in had they not be relegated.

6.20pm - It means that Team GB are definitely going to get either silver or...gold!

6.15pm - NEW WORLD RECORD!! Incredible! A new world record from the Great Britain men's team sprint team! The crowd are going crazy - and Team GB are in the final where they'll take on France! 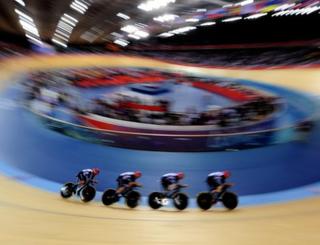 PA
Great Britain's men won their heat in the team pursuit with a world record!

6.10pm - It must be an important session at the Velodrome - Prime Minister David Cameron has just been spotted in the crowd.

6.05pm - So Britain qualify top of the team pursuit...they are back in action tomorrow...but now back to the next round of the men's team sprint...and it's nearly medal time.

6pm - Victoria Pendleton has been speaking about being relegated from the final..."We were probably just a bit too eager and excited...It's one of those things." she said.

5.50pm - NEW WORLD RECORD! Team GB's team pursuit squad don't care that it isn't the final...they step up and smash the world record! It's safe to say they will be through to next round...and they should qualify in first.

5.35pm - It's been announced that China will take on Germany in the final of the women's team sprint...Germany will replace Great Britain.

5.25pm - The men's team pursuit is still going on...there isn't as much excitement around this event as the final isn't until tomorrow. Most people in the velodrome seem to be waiting for the team sprint to start again.

5.20pm - Everyone in the Velodrome looks really disappointed because Team GB's women are out of the final - no one more than the Duke and Duchess of Cambridge (William and Kate) who are watching on from the stands.

5.10pm - The boss of the GB cycling team is a chap called Dave Brailsford - and he looks really annoyed after speaking to the judges.

5.05pm - Still dead confusing - we still don't know if Jess and Victoria will be disqualified from the chance to race for gold...

5.01pm - It's the qualifiers for the men's team pursuit now - it's not the same as the team sprint...and no one will win a medal today.

5pm - NEW WORLD RECORD! China are the team to beat, they just set a new world record! Again! Who can stop them? The final of the women's team sprint should be Great Britain v China....as long of GB are disqualified.

4.59pm - The second rider isn't allowed to overtake before the second lap...and there's a chance Team GB did that in their heat...it could mean they are relegated.

4.58pm - Hang on a minute, the judges are looking to make sure no one broke the rules in that last race.

4.55pm - Victoria Pendleton flies round the track on the last lap...and they set the fastest time in this heat. Let's see how China can do...

4.52pm - A huge roar from the crowd that can mean only one thing - Great Britain are on the track!

4.50pm - The women are back out for the next round of the team sprint...this is for a place in the final which will happen later tonight.

4.45pm - EASY! Great Britain are the fastest of the qualifiers! An amazing performance from Sir Chris Hoy and the boys.

4.37 - DISASTER! One of Team GB, Philip Hindes, falls off because of problem with his bike! Don't worry - there will be a restart so it's not the end of the world.

4.35pm - Here come Team GB in the men's team sprint. They are in the last heat against Germany. France have the quickest time so far....can GB beat that?

4.25pm - The BBC commentators think the world records are being broken because it's really warm in the Velodrome...and that makes the air easier the cycle through.

4.21pm - So Britain's women finished second, just behind China, Germany third, with Australia in fourth. They all go through to the next round, with the likes of France and The Netherlands joining them.

4.13pm - DOUBLE WOW! The world record lasts about five minutes - as China smash it in the very next race! And this is just the heats! It looks like they will be the team to beat!

4.10pm - WOW!! The crowd go wild as Great Britain's Jess Varnish and Victoria Pendleton not only set a new fastest time in the heats - but also a new world record! They will be through to the next round.

4pm - It's the heats of the women's team sprint up first...the Netherlands have set the quickest time so far, but Team GB are on the track next.

PREVIEW: It's day one of the track cycling at London 2012, and two of the biggest names in the sport are getting on their bikes.

Sir Chris Hoy and Victoria Pendleton are both in action in the team sprint events.

Track cycling was one of Team GB's most successful sports at the last Olympics in Beijing.

After Bradley Wiggins' gold in the road cycling yesterday, the track team will be hoping to carry on the success on two wheels.

There will be three rounds of the men's and women's team sprints - qualifiers, semi finals and the final.

So that means medals up for grabs.

Sir Chris Hoy will ride as part of the team of three in the men's, and Victoria Pendleton in the women's two person team.

Hoy won gold in the event in the last Olympics and his team will be one of the favourites.

Pendleton won silver and gold in Beijing, so will hope to help her team get on the podium.

There will also be a qualifier for the men's team pursuit - in which Team GB are reigning Olympic champions.

It all starts at 4pm - and we'll be bringing you all the updates as they happen!