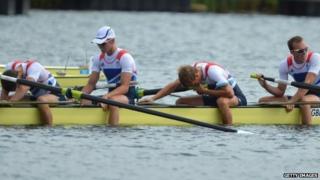 The team were hoping for gold but narrowly missed out after South Africa held off a last minute push from the Brits.

They came in only 0.25 seconds behind the winning boat.

Richard Chambers was part of team and described the race as a brutal fight from the start.

Denmark lead the race but were out sprinted by Team GB and South Africa finishing up with bronze.

The Brits were picked out as the ones to watch after they won all of their heats and the semi-finals.

This is the first rowing gold that South Africa have ever won.

Minutes later the women's eight team hit the water managing sixth place. Team USA were strong favourite and took the gold medal for a forth year in a row.