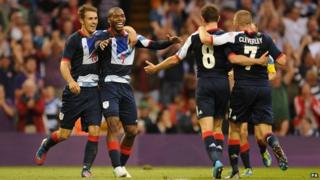 The GB men's football team are through to the Olympic quarter-finals thanks to a one nil win over Uruguay.

Chelsea's Daniel Sturridge, who's only just got over being ill, scored the only goal of the game just before half time.

Uruguay were one of the favourites to win gold, having taken the title twice before, but have so far failed to dominate.

A crowd of 69,000 got in on the Olympic action watching the match at Cardiff's Millennium Stadium.

Team GB go through at the top of their group to the knock-out stages, they'll play South Korea on Saturday.