London 2012: Andy Murray through to quarters 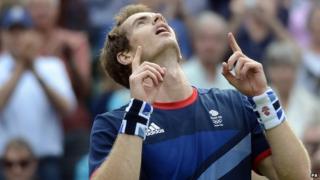 Andy Murray moved closer to an Olympic medal after battling past Marcos Baghdatis to reach the men's singles quarter-finals.

Murray, who also beat Baghdatis in the third round of Wimbledon, fought back from dropping the first set to win 4-6 6-1 6-4 on a noisy Centre Court.

The world number four faces Nicolas Almagro of Spain in the last eight.

Britain's Murray is back in action later on Wednesday when he partners Laura Robson in the mixed doubles.

Murray and Robson have a first-round encounter with Czech duo Lucie Hradecka and Radek Stepanek in the last match on Court 18.

With the mixed doubles draw made up of only 16 teams, pairs need only win two matches to enter medal contention.

Murray then will then turn his focus back to his match with Almagro, which takes place on Thursday.