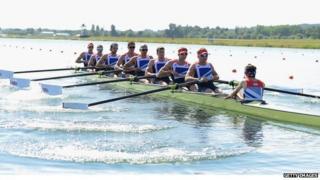 Minutes after Team GB got their first gold, the men's rowing team added to the medal table with a bronze.

In a nail-biting men's eight final, Great Britain gave it everything they had narrowly missing out on silver.

Team GB were hot on tail of the race leaders from beginning to end but ran out of steam in the final few strokes.

The German team were favourites to win and took the gold with Canada stepping up at the last minute to take silver.

The team say they're disappointed with the result but say they couldn't have given it any more.