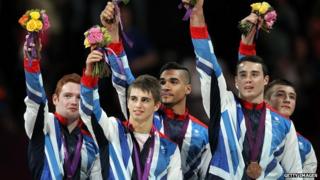 The London 2012 Games are well underway.

We've had cheers for Team GB in gymnastics, swimming, eventing and cycling road race. But tears in diving and judo.

Away from Team GB; some incredible moments - the 16-year-old Chinese swimmer smashing her personal best, and the 15-year-old who won Lithuania's first ever swimming Olympic gold.

Which sport has been the most interesting and which athlete has made you cheer the most?

Here are some of your favourite moments so far...

"I think the swimming has been the best so far because world records have been broken. I'm also looking forward to the 100m sprint to see Usian Bolt!!! COME ON TEAM GB."

"I have really enjoyed watching all of the swimming. There were two amazing races: the relay where everyone thought America would win and then somehow France just caught up and won! Also when Michael Phelps was about to win and then someone from South Africa gradually got closer to him and won by five milliseconds! It was fantastic!"

"My best Olympic moment has been when Beth Tweddle qualified for the uneven bars final with the highest mark!"

"My favourite moment was the Men's Team final in gymnastics. I am a big gymnastics follower and fan myself and it was incredible to witness the boys make the final for the first time, let alone win a medal. I am very proud of all the team."

"I am enjoying swimming so far - it is really exciting."

"The gymnastic team routines blew me away, Team GB were outstanding. The floor performance was really special!"

"It has to be the opening ceremony for me - it was amazing, and really funny too! Seeing all the medals that Team GB have won has made me really proud to be British. I wish Tom Daley all the best for his next competition!"

"My best moment is Team GB getting their first medal!"

"I liked watching the swimming and even though Tom Daley came fourth in the diving I still cheered him on!"

"The cycling has been the most exciting, especially the women's road race. I cheered for all the GB athletes in both races but Lucy Armistead and Bradley Wiggins have made me cheer the most so far."

"My favourite events so far have been the swimming and diving because Tom Daley was amazing when he performed his dives. I also enjoyed watching Rebecca Adlington swim really fast in the heats earlier this week! The men's gymnastics were fantastic too!"

"The opening ceremony was the best! The BEST show I've ever watched. Amazing! A HUGE congratulations to the Olympic team who made all this happen."

"The sports which have interested me the most are swimming and gymnastics."

"For me it just has to be the opening ceremony."

"My favourite Olympic moment so far was when the equestrian team won silver! Mum and I were sitting in the car listening to it on the radio - we were completely silent until the commentators said that GB had won silver and then we started cheering really loudly!"

"Our favourite Olympic moment was when the GB men's gymnastics team got bronze in the final. We were very overwhelmed with the whole thing. We were disappointed that we missed out on the silver because of the Japanese. However, at least we got a medal!!! Go Team GB!!!"