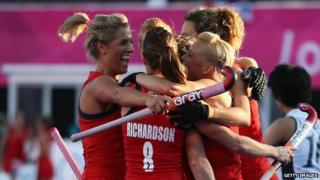 Great Britain's women got their Olympic campaign off to the perfect start, by beating Japan 4-0 in their opening game.

Two first-half goals from Alex Danson helped the team to their biggest win against these opponents for 34 years.

Sarah Thomas and Sally Walton were also on the score sheet, in front of 16,000 supporters.

There were no more goals in the second half, but late injuries to Kate Walsh and Helen Richardson were concerns.

Britain will play South Korea in their second group match on Tuesday.

The Koreans lost their first match of the tournament 4-0 against China on Sunday, while reigning champions the Netherlands won 3-0 against Belgium in the other Group A match. 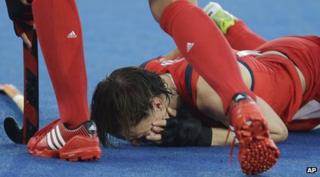 "I thought that was a very thorough performance," said GB coach Danny Kerry.

"We took our chances in the first half. I felt we were tight and disciplined. In the second half we hit the post and their keeper made a good save."