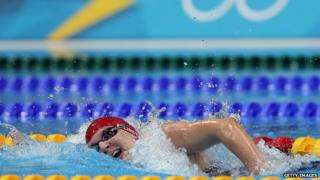 The team GB swimmer had won gold in the event in Beijing, but actually swam faster this time around.

Adlington said "I'm so glad I got a medal at a home Games. Not many people can say that."

Although she won two gold medals in 2008, not many people expected her to repeat that again in London.

She begins her defence of the 800m freestyle title in the heats on Thursday, with the final on Friday evening.

"The crowd was so overwhelming. Twelve years' hard work has gone into that," Adlington added.