Newco Rangers off to a shaky start in the lower leagues 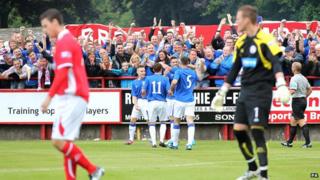 Rangers got off to a pretty shaky start in their new life in the lower leagues.

The first match for Newco Rangers was in the Ramsdens Challenge Cup which is a a tournament for Scottish lower league teams.

Only a Lee McCulloch goal in extra time gave the former Glasgow giants an edge to go past Second Division side Brechin City and win 2-1 in the first round.

The club were kicked out of the Scottish Premiere League last season after getting into massive money problems.

In July Scottish Football League clubs voted to send them to play in the third division.

Lots of the clubs top players have left the side since it was relegated to the bottom tier.

Boss Ally McCoist has managed to keep six former internationals in his squad.