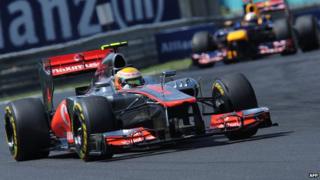 The team McLaren driver led throughout the race but had to fend off a fierce challenge from Lotus driver Kimi Raikkonen.

It's Hamilton's second win of the season.

After the race he said, "It is great to finally see the upgrades working and I have been able to put the car where I want to this weekend."

The next race of the season will be in Belgium at the beginning of September.