Could there be life on Saturn's moon? 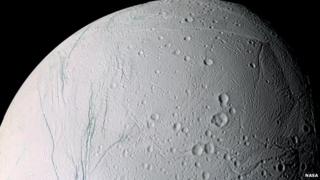 Scientists searching for signs of alien life have started looking in a pretty unexpected place.

Enceladus is one of Saturn's moons and is one billion miles away from the sun.

A robot spacecraft Cassini, which has been in orbiting Saturn for the last eight years found that the moon has an atmosphere and geysers of water erupting from its surface into space.

Enceladus has now been rated a top priority for future space missions.

The robot also found that the geysers have organic materials and gases needed for life to exist.

One astrobiologist, Professor Charles Cockell has said that he'd rather go to the tiny moon than try and find life on Mars, "If someone gave me several billion dollars to build whatever space probe I wanted, I would have no hesitation."

But it could take up to thirty years for scientists to find out if life really can exist there, and scientists fear that by that time telescopes may have already spotted signs of life elsewhere.