Cavendish misses out on gold in the men's road race. 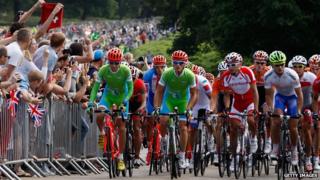 Team GB haven't got off to a great start in their quest for Olympic gold.

Super British cyclist Mark Cavendish had been one of the favourites to win the men's road race but failed to finish in the top ten.

Some people are saying that the British team got their tactics for the race wrong.

Thousands of people had lined the 250 kilometre route from Box Hill in Surrey to London to cheer on the home team.

Cavendish is the two-time world track champion the most successful British professional road racer of all time without an Olympic medal.

But this isn't the first time has missed out at the Games.

Back in 2008 in Beijing Cavendish was the only British track cyclist to come home empty handed.