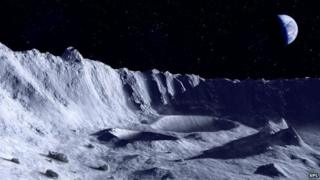 The Moon was created when a huge object smashed past the Earth at a high speed, astronomers have claimed.

Scientists at the University of Bern, Switzerland, reckon a huge object was involved in a 'hit and run' with Earth at a high speed around 4.5 billion years ago.

Some of the debris from that collision then got trapped in orbit and then formed to create our Moon.

One previous thought was that a slow impact between the Earth and a Mars-like body had caused the moon to form.

Space experts know that the Moon and Earth are made from similar stuff, both have an iron core, for example.

The problem with the slow impact theory is that it wouldn't have created debris from Earth.

But with a fast 'hit and run', the remains of the collision would have come from the Earth, supporting what we know about the Moon's make-up.

The astronomers don't know the identity of this speedy smasher, so there's some more detective work to be done!