Could there be life on five newly discovered planets? 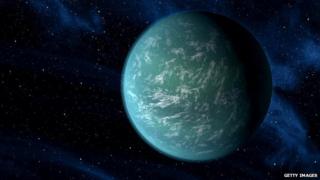 Is life on other planets possible? Well a team of American astronomers certainly seem to think so.

Five new planets were discovered by Nasa's Kepler Space Telescope earlier this year and even though they're 10,000 light-years away from us, we have a lot in common.

They rotate around their star in a similar way to how Earth goes around the sun.

So scientists at the Arecibo Observatory in America studied the planets to see if they have the right geography, temperature and amount of gravity for livings things to exist there.

Josh Winn, who wrote the report said: "It's telling me that the solar system isn't some fluke. The fact that the sun's rotation is lined up with the planets' orbits, that's probably not some freak coincidence."

Star Trek actor to become the oldest person to go to space!