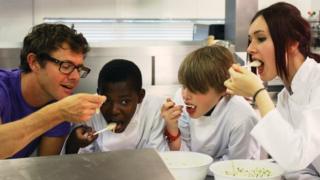 A new ice cream inspired by the Olympics is being served in Middlesbrough - but what goes into an Olympics inspired ice cream?

Turns out the recipe for 'Aqua' is little more delicious than that.

The ice cream is being served at a CBBC party in Albert Park, Middlesbrough on Friday.

It was designed by Dominic on the CBBC Olympic Games Challenge and perfected by CBBC chef Stefan Gates.