Is Usain Bolt faster than a cheetah? Compare athletes to animals 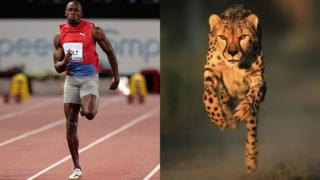 The Olympics promises to showcase some of the world's fastest athletes but have you ever wondered how they compare to the quickest animals on the planet?

Well we have. We've looked at some athletic animals to see who really can run faster, throw further and jump longer and higher than some of London 2012's star names. Here's our guide to how animals compare to athletes.

The 100m sprint is arguably the biggest event in the Olympics.

The title of being the fastest man on Earth is currently held by Jamaica's Usain Bolt, who set the current world record in a lightning fast 9.58s.

Stars of track and field 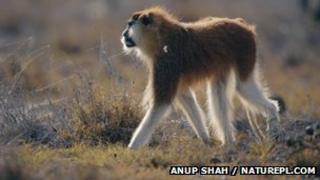 If Bolt raced against a cheetah, the world's fastest land animal, you wouldn't be too surprised to see Usain eating its dust would you?

However, did you know that the brown hare is no slouch either and capable of running the 100 metres in just five seconds - essential to avoid the many predators trying to eat it.

Perhaps a fairer comparison would be with one of our closer relatives but even here Usain could only hope for silver, as a patas monkey would beat his world record time by three seconds.

Can Humans beat any animals?

Where humans stand a better chance of beating animals is across longer distances.

Our upright posture and ability to shed heat make us remarkably good at long distance running, with marathons being completed in a little over two hours.

North America's pronghorn are capable of cruising at speeds of 65km per hour for several kilometres to escape predators. And if that pace was maintained they could complete a marathon in well under an hour.

With their speed and endurance, they seem like the long distance runners to beat but they may not be able to keep this speed up for a full marathon distance of 26 miles.

So perhaps humans could compete for Olympic gold over longer distances after all? 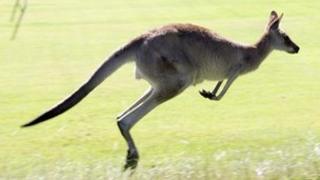 With kangaroos, frogs and grasshoppers having developed long legs with large muscles for maximum hopping power, the animal kingdom appears to be one step, bound or leap ahead of humans in the jumping disciplines too.

However, Olympic athletes can clear over 2.5m in the high jump and lengths of 9m in the long jump with a single leap.

To stay one jump ahead, leaping bush babies' legs convert the energy of impact back into propulsion, essentially acting like springs.

This miraculous feat enables them to reach 2.25m in height, which may not sound that impressive but is the equivalent of Andrey Silnov clearing two stacked double-decker buses.

Fleas, however, could still be in the running for a podium finish, catapulting themselves over 200 times their body length up to 33cm. Their secret is using their hind legs as multi-jointed levers.

This summer, javelins, discus and shots will be thrown as far as humanly possible in the pursuit of glory - can our animal athletes possibly compete?

During the Beijing Games the gold medal winner Andreas Thorkildsen of Norway threw a javelin over 90m setting a new Olympic record.

Chimpanzees do not throw javelins yet, but they have been observed in Senegal making and using wooden spears.

It does not seem possible to compare a human hammer thrower with an arachnid but the bolas spider's athletic abilities come very close as they swing a sticky blob of silk to catch moths.