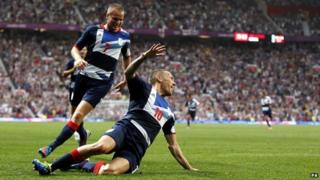 The Great Britain men's football team drew 1-1 in their opening match against Senegal.

Welshman Craig Bellamy gave the home side the lead at Old Trafford after 20 minutes.

But in the 82nd minute, Senegal's Moussa Konate made things level and denied GB the victory.

Manager Stuart Pearce said his team struggled with nerves: "A lot of our players have played Premier League football but this cranked it up a bit."

Team GB now face UAE on Sunday and Uruguay next Wednesday with at least one win needed to guarantee a place in the quarter finals.

After the game, captain Ryan Giggs said he was unhappy with some of Senegal's tackling.

GB goal scorer Bellamy was brought down by Senegal's Saliou Ciss in the second half, a challenge team GB thought warranted a penalty.

Giggs said: "There were a few naughty challenges. A few of our lads are struggling now."

In the other Group A match, also at Old Trafford, Uruguay came from behind to beat UAE 2-1. 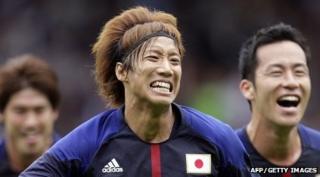 Elsewhere, there was a shock when Japan beat Spain 1-0 at Hampden Park.

A strike by Japan's Yuki Otsu in the first half was enough to give them victory over a 10-man Spain, after Inigo Martinez was sent off.