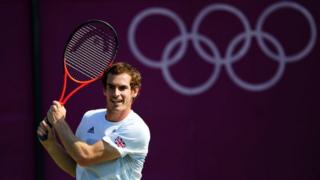 Andy Murray faces a difficult route to the Olympic final after being given a tough draw for the London 2012 tennis tournament.

He'll play Stanislas Wawrinka, a gold medallist in the doubles in Beijing, in round one before potential ties against top players Richard Gasquet, Tomas Berdych, Novak Djokovic and a possible final against Roger Federer.

Murray has never won a singles match at the Games having lost in the first round to Chinese Taipei's Lu Yen-hsun in Beijing in 2008.

Wawrinka meanwhile made it to the top of the medal podium when he partnered Roger Federer in the doubles four years ago.

Murray and Wawrinka have played each other before, a close fourth round match at Wimbledon in 2009 that ended in a five set win for Murray.

Andy and his brother Jamie are also teaming up in the doubles and play Austria's Jurgen Melzer and Alexander Peya in the first round.