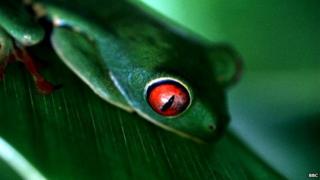 Animals, plants and birds living in the world's rainforests are under real threat, according to new research.

Scientists say that despite many exotic species being given special protected status, the number of different creatures in the world's forests is going down.

Over the last 40 years hunting, cutting down trees and pollution has had a massive impact on the wildlife in tropical forests.

And now biologists say the remaining forests set aside as safe havens are being affected by activities nearby.

Even though protected forests prevent habitats being damaged the study says that wildlife are at risk because of activities like logging, house-building and hunting in areas that run alongside these forests, that aren't under the same protection orders.

Prof William Laurance who was involved in the study said these activities have a "direct negative impact" on animals and plants living in the protected areas.

He said, "It is not enough to protect interiors while ignoring surrounding landscapes, which are being rapidly deforested, degraded and over-hunted."

More than half of Earth's plant and animal species live in our rainforests in places like Asia, Africa and South America.