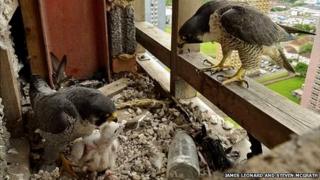 Two birds of prey have been discovered raising a peregrine falcon chick in a Glasgow tower block.

The birds have been nesting on the 24th floor of a 27-storey building which means the planned demolition of the flats can't go ahead.

With the help of RSPB Scotland the birds were given protection and a camera was set up to watch the nest.

The peregrines produced two eggs, only one of which hatched, and the chick left the nest on 12 July.

But the adult birds are still there and the chick may still come back for food.

Experts had previously wanted to move the birds so the demolition could go ahead, but it's is illegal to disturb birds in the middle of breeding.

A special nesting box was made at another block of flats nearby, to tempt the birds away from the demolition block.

But they just wouldn't go! They stayed at the demolition site and laid the eggs which led to the baby bird hatching. 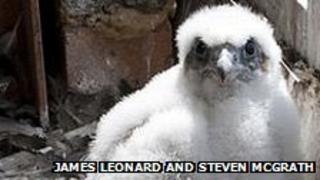 A young bird like this would normally be fed by its parents for up to eight weeks. After that, all the birds would be expected to fly away and leave the nest behind.