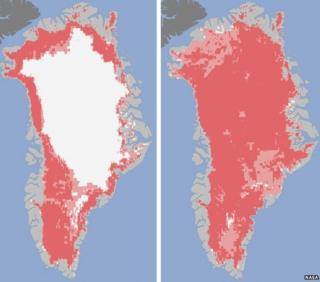 Nearly all of the ice sheet covering Greenland's surface melted over several days in July - something scientists have never seen before.

Images from Nasa satellites have shown the largest melting since they began watching the area 30 years ago.

On average in the summer, only about half of the surface of Greenland's ice sheet naturally melts.

Nasa's Son Nghiem said: "This was so extraordinary that at first I questioned the result: was this real or was it due to a data error?"

Meltwater in high places quickly refreezes. Meltwater near the coast is either held by the ice sheet or lost to the ocean.

It's not yet clear whether this melting will have an effect on overall volume of ice loss this summer, or sea level rise.

Researchers also aren't sure whether it was caused natural events or by man-made climate change.

But it did happen at the same time as an unusually strong ridge of warm air went over Greenland.