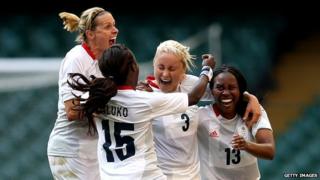 Team GB's women opened the Olympics with a 1-0 over New Zealand in the football at Cardiff's Millenium Stadium.

The match was the first event of the games and came two days before the opening ceremony.

Steph Houghton scored the only goal of the game with a 25-yard free-kick.

England midfielder Sue Smith said: "To have the confidence to strike the ball like that was great.

"The goalkeeper had no chance. It was a fantastic strike."

London 2012 told Newsround that the first football matches started before the opening ceremony so that all the games could be fitted in before the Olympics finished!