Drones: How robots can help save lives in a disaster 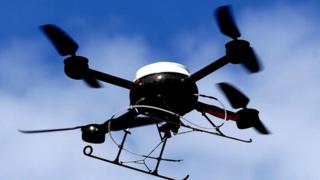 Robots could be used in the future to help after natural disasters like floods and earthquakes, and respond to terrorist attacks.

That's according to Professor Nick Jennings who is working on a multi million pound project for the goverment to see if remote controlled drones could save lives.

These unmanned aerial vehicles (UAVs) would be launched to hover over a disaster area and assess the situation.

This information is then sent to emergency services to so they can co-ordinate a response and send help to the right place.

Robots would also be sent to areas on the ground that are too dangerous for humans, where they could defuse bombs or rescue people who are trapped.

The research has only been tested on a computer so far but Prof Jennings wants to test his robots out in a real-life situation.

He said, "The next stage is to run some mock disasters in open spaces, and have human actors in there, interacting with the robots, doing it for real."