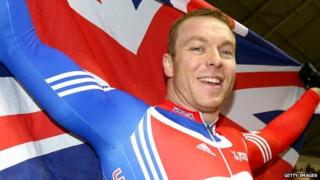 Sir Chris Hoy has been chosen to carry the flag for Team GB at the opening ceremony of the London 2012 this Friday.

He won the vote by 542 members of the British Olympic team.

The 36-year-old cyclist said he was "absolutely delighted and honoured" to have been chosen.

"To lead out your team at a home Olympics is truly a once in a lifetime opportunity and one that I can't wait to experience in just a few days time."

Hoy is Scotland's most successful Olympian and was BBC Sports Personality of the Year 2008.

He won a silver medal at the Sydney Olympics in 2000, gold at Athens in 2004 and three more golds in Beijing four years ago.