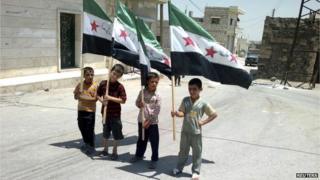 The international charity War Child has accused all sides in the Syrian conflict of deliberately targeting children.

A report they've brought out says six big rules - aimed at protecting children - have been broken.

The rules include not to kill or kidnap children, or train them as child soldiers.

Some children have told their stories of living in a country that is at war.

Most Syrians trying to escape from the country are children.

One girl, who has left the country, said: "A bomb hit my house. A wall fell on my father, my mother, and my younger brother."

Her parents survived but she said: "One of my friends died in front of my eyes."

The charity War Child is working with some of the children to help them through the trouble.