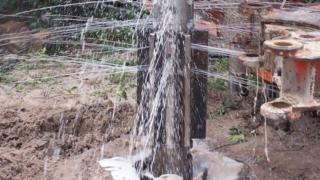 A massive underground water source has been found in one of the driest countries in Africa - which could help the country to develop.

The water source could supply the north of Namibia for 400 years.

Scientists say the water is up to 10,000 years old but is cleaner than many modern sources. It could be used to increase farming.

The government of Namibia has been looking for a better water supply for the last ten years.

At the moment 800,000 people who live in the north of the country rely on a 40-year-old canal to bring them water.

Researchers have now found an underground source called an aquifer near the border with neighbouring Angola.

Project manager Martin Quinger says: "The amount of stored water would equal the current supply of this area in northern Namibia for 400 years, which has about 40 percent of the nation's population.

A smaller, salty aquifer sits on top of the new fresh water supply so they will have to be very careful when they drill down to avoid the salty water mixing in with it.

One of the biggest advantages of the new aquifer could be in helping people cope with climate change and drought.